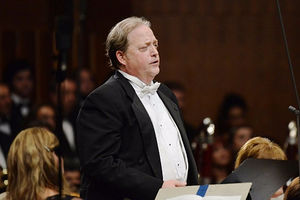 Any performance of Arnold Schoenberg’s epic secular cantata Gurre-Lieder is a rare and exceptional musical event. This summer’s Edinburgh International Festival staging was well reported but on the other side of Europe, the Lisinski Concert Hall in Zagreb made history by presenting this gigantic opus not only for the first time in Croatia, but for the first time in the entire Balkans.

The driving force behind this singular triumph over seemingly insurmountable logistics, artistic rivalries and political ambivalence was the octogenarian Musical Director of the Croatian National Theatre in Zagreb, maestro Nikša Baresa. Previously a regular conductor at the Wiener Staatsoper and La Scala, Baresa has of late concentrated his formidable talents in his home country of Croatia, and the artistic and musical results are indeed laudable.

The enormous orchestral and vocal demands of Gurre-Lieder are intimidating, starting with a huge massed choir supported by two symphony orchestras, including four harps, seven clarinets and four Wagner tubas – not to mention a mammoth percussion section with the rarity of iron chains for ominous skeletal rattling. Musically, this staggeringly ambitious work from an atonal-tinkering 26-year old is both a reflection of Wagner and Mahler and a foretaste of Richard Strauss, particularly Die Frau ohne Schatten. Alban Berg’s illuminating analysis of Gurre-Lieder identifies 35 different leitmotifs which alone testifies to Schoenberg’s devotion to the bard of Bayreuth. The opening extended E flat major chord in slow 6/8 tempo is identical to the first measures of Das Rhinegold, but instead of brooding and slowly expanding double basses, bassoons and horns, Schoenberg uses chirping flutes and harps to create an Arcadian rather than aquatic ambiance. Hints of Rhinegold, Siegfried and even Parsifal abound but as the composition progressed, rhythmic fluctuations and harmonic progressions are much closer to Mahler, especially Das Klagende Lied.Rhapsodic string passages anticipate the lyricism of Korngold.

Maestro Baresa assembled an impressive collection of soloists, only one of whom was not Croatian. American heldentenor Michael Robert Hendrick sang the Bacchus-esque role of Waldemar with a strong upper register and admirable dramatic insight. Although the lower register could occasionally have been more resonant, this was a heartfelt and powerful performance. Lyrical sections such as “Mit Toves Stimme flüstert der Wald” were especially well phrased. The terrifying monologue when Waldemar confronts God as an equal was electrifying. A clarion top B flat on “Hofnarrn tragen” would have intimidated even the Almighty. As the object of King Waldemar’s illicit affection, the role of Tove was sung by Adela Golac Rilović. Whilst being suitably lyrical with a young Melanie Diener-ish timbre, Rilović was often subsumed by the sheer tsunami of orchestral sound. Longer phrases such as “Die leuchtenden Sterne” were well shaped but overall diction was somewhat lacking and did little justice to the poetry of Jens Peter Jacobsen’s original text. For the same reason, Ozren Bilušić as the Speaker and Siniša Stork as the Farmer were not particularly distinguished.

Much more successful was Stjepan Franetović as Klaus the Jester. This role is a close cousin to Wagner’s Mime and Franetović’s crisp diction, clever word colouring and excellent projection made “Ein seltsamwer Vogel” a real highlight. A trumpeting top B natural on “selber gnaden” ensured a riveting conclusion. In the relatively small but pivotal role of the Wood Dove, Croatian mezzo Dubravka Šeparović Mušović was outstanding. A consummate actress with an impressive vocal technique, Mušović infused the maudlin “Tauben von Gurre!” narration with real pathos. The devastating news that “Tot ist Tove” was deeply moving and there were excellent chest notes in the marcato “Wollt ein Möch” passage. A snarling “Gurres Taube zerriß” was pure Dunja Vejzović and a perfectly sustained G natural on “Toves” further evidence of Mušović’s exceptional vocal skills.

The combined Croatian National Opera, Radio/Television and Music Academy chorus were not only decibel shattering when required but also sang with commendable attention to the dynamic nuances of the score. The tricky cross rhythms and contrapuntal syncopation in “Gegrüsst, o König” were immaculate. The almost unbearable climax to “Seht die Sonne” with final sustained fff C major chord was one of those extremely rare hair-raising concert experiences.

The absolute high point of the performance however was the conducting of Nikša Baresa. For a musician who turned 80 in March and had never conducted this immensely challenging work before, this was in all respects a towering achievement. His energy on the podium was that of a man half his age and the enthusiasm and vitality of his conducting clearly energized both musicians and vocalists. Baresa coaxed some luxuriant string colours from the enormous orchestra, especially in the instrumental interludes and the cello introduction to Part III. His attention to the constant rhythmic and dynamic changes of this exceedingly complex score was exemplary. Brava Hrvatska, bravissimo Baresa.