Back to List
Acclaim (For Reviews by opera role, see Repertoire)
A short-haired king, a freaky rat, Marilyn Monroe
Tweet 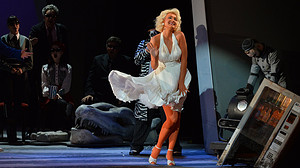 The Hungarian audience, unfortunately, rarely has the opportunity to see and hear this work - I do not remember it having played in Budapest for the last decade. We were down with the show as well, after the 1921 Chicago premiere, the Hungarian State Opera House only set it up in 1975. But Prokofiev's sparkling music and Carlo Gozzi's surreal story on the tray offer the opportunity for a lively performance, and the Zagreb team has made the most of it. The auditorium unfortunately did not pass - this was the first non-full performance of this year's opera festival - and I am really sorry for those who missed it.

Gozzi, an Italian poet and playwright of the genre of comedy dell'arte - whose works inspired scenic works such as The Magic Flute, Turandot or Wagner's Fairies - wrote in 1761 the story of the melancholic and hypochondral princes who are in vain to laugh, only in Fata Morgana, the wicked witch in the unlucky accident. But he is cursed with revenge by three invincible love of orange. The princess succeeds in finding the fruits hidden in the princesses and finally marrying her with the only surviving compositions.

The Croatian National Theater team came to Miskolc as a conductor and orchestra. They could not fit into the orchestra pit, so two harp and a few percussion instruments moved out to the edge of the ground floor auditorium. But not only did the limit between the performer and student space disappear: the members of the choir occupied the first row in more than one number, and the soloists took the floorboards at times. This is, of course, only an idea of ​​hundreds of hundred for which the director, Krešimir Dolenčić, is greatly appreciated. The most amazing thing was that something was happening on the stage every moment, something new, something quirky, something funny, something weird. A colorful drift flew, eleven armchairs were masked, huge toy cars rolled, acrobat-dancers hanging in the air ...

Which was just an addition to the otherwise awsome piece. The lecture took place in the Croatian language instead of the original French, and after some Croatian, I found that the Slavic language fits well with the Russian folk Prokofiev's music, which the orchestra played excellently. With strong gestures, extreme dynamics and great tempo, the musical humor was rewarded, while the conductor Nikša Bareza paid great attention to the stage performances. The performance of the singers and the dancers was tricky - sad fact, but in Hungarian music theater, unfortunately, we rarely encounter such a high quality game. Each player had a completely unique, meticulously crafted gesture and gesture system on the stage. And I did not even mention the almost inexplicably rich and imaginative set of costumes and costumes: the short-haired king, the three-handed, cranial intriguer, the striped socks, or the Marilyn Monroe-Orange Narrator. It is difficult to pass on the experience of such a production. That is why I suggest to the journalists, if they are going to Croatia, they should definitely take Zagreb to see this show. They will not regret it.