Back to List
Acclaim (For Reviews by opera role, see Repertoire)
Sarasota Opera closes its American series with a devastating "Of Mice and Men"
Tweet 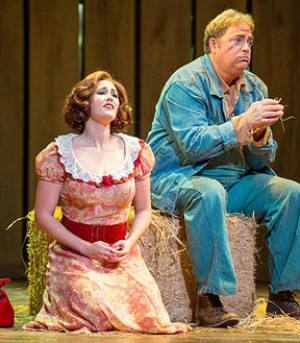 In the final tragic moments of Carlisle Floyd’s Of Mice and Men, a handsome, well-dressed woman began quietly weeping, continuing without letup until the end of the opera. “I’m sorry,” she said after the house lights came up. “I knew what was coming but I couldn’t help myself. It was just so powerful.”

Floyd’s 1970 adaptation of John Steinbeck’s tragic tale of George, his retarded friend Lennie and their thwarted American dream received a deeply moving and emotionally harrowing performance Sunday afternoon, presented by Sarasota Opera. The production was not only the high point of the company’s American Classics Series, but one of its finest efforts over the last decade.

Which makes it even more depressing that the company on Florida’s toney Gulf Coast is discontinuing its widely praised American opera project after just three years; this production of Floyd’s opera, which runs through Saturday, will be the final work in the series. Executive director Richard Russell said yesterday that despite critical accolades and much favorable press, ticket sales proved consistently disappointing and much of their home audience in Sarasota—made up largely of wealthy senior retirees—did not respond favorably to the American works performed.

That certainly did not appear to be the case for Of Mice and Men at Sunday’s matinee. The audience frequently punctuated the performance with spontaneous applause, and the thunderous ovation at the end was by far the loudest and longest heard at any of the four operas presented this past weekend. It’s hard to avoid the feeling that Sarasota Opera has overreacted to negative criticism by a few and precipitously pulled the plug on this laudable project just as it was gaining traction with its base audience.

Steinbeck’s Depression Era novel tells of the migrant workers George and Lennie, close friends who dream of buying a farmhouse and land where they can lead a peaceful life. Yet the duo is constantly on the run from the mayhem involuntarily created by the addled man-child Lennie. Gentle and child-like, his fondness for soft, furry things and inability to control his own brute strength leads him to inadvertently kill a mouse, puppy and eventually a woman, which leads to the tale’s ultimate tragedy.

For many, Of Mice and Men is Floyd’s finest opera, darker and more textured than Susannah, and more consistent and musically linear. There is a lean unsentimental lyricism and a restless haunted quality to the score, from the opening scene where George and Lennie are on the run from the police to the final scene where George must take his best friend’s life to save him from a worse fate at the hands of strangers.

As George, Sean Anderson was first-class across the board, singing with a ripe, big-boned baritone and bringing daunting conviction to his avowal that he and Lennie will someday own their farm. The tall singer is a wonderful actor and he put across George’s exasperation over Lennie’s clueless acts as readily as his unspoken affection for his friend and numbed desolation at the opera’s curtain.

Michael Hendrick came in at the 11th hour to save the production. The veteran tenor sang with a mellow tone and sweet top notes. Dramatically, Hendrick conveyed the endearing vulnerability of the handicapped man who likes to stroke soft things as well as his propensity to sudden, fearful reactive violence. Hendrick is a bit more mature than Lennie should ideally be, but in many ways that made George’s protectiveness over him even more touching.

Sarasota Studio Artist Chelsea Basler showed vocal gleam and impressive agility as Curley’s Wife, flinging out strong high notes with ease. The young soprano also revealed herself as a poised actress, etching a vivid and sexy portrait of Curley’s Wife, while communicating the sadness beneath the character’s slatternly exterior. For all her flirtatious confidence, her character is just as damaged and child-like as Lennie.

Jon Jurgens, also a Studio Artist, brought fiery intensity and a sense of danger to Curley, her jealous, hot-tempered spouse. Company regular Andrew Gangestad was low-key and effective as the old ranch hand Candy, whose aged, sick dog is shot in Act I, a jarring foreshadowing of Lennie’s tragic end. (Though taking place offstage, the shooting of Candy’s dog proved so upsetting to some audience members that there were several walkouts early in the run.)

Matthew Hanscom contributed a fully realized portrait of the tough but compassionate foreman Slim. Marvin Kehler as Carlson and Jason Wingfield as the Ballad Singer admirably rounded out the cast.

The staging, “adapted from a production by John Conklin,” offered a suitably dingy clapboard set for the ranchhands’ bunkhouse, though the spartan outdoor design for the framing scenes looked decidedly cheesy. Howard Tsvi Kaplan’s period costumes had the lived-in, brownish Depression style, although the smart makeup and dress for Curly’s Wife, with matching bright red belt and shoes, looked far too glamorous for the down-at-heels lower-class milieu.