Back to List
Acclaim (For Reviews by opera role, see Repertoire)
MUSIC REVIEW: 'OF MICE AND MEN'
Tweet 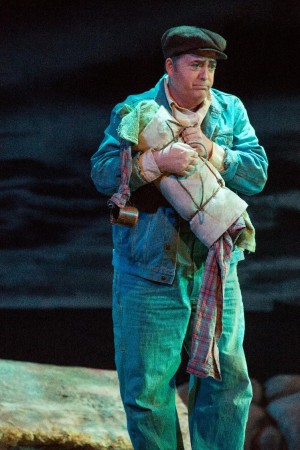 “Of Mice and Men,” an opera of emotionally epic proportions written so economically not one note or word lacks meaning, opened this weekend for the first time at Sarasota Opera. Carlisle Floyd, one of America’s greatest living opera composers, has taken the classic Steinbeck story and given it, through his music, color, pathos and despair, that which has turned it into the great American tragedy that reaches into your heart, squeezes it and, finally, rips it from your chest.

In producing this, Sarasota Opera — the third in its American Classics series — has given us a cast that so embodies this work, you forget they’re singing and acting. Rather, you grow to empathize with the piteous people on stage to the point they become your relatives, your friends, your family; people you grew up with; people you know; people you’ve seen; people you hope you’re not but know, deep down, you could be.

George Milton (Sean Anderson) is a big-hearted man of America, a wanderer and worker who dreams of a better life and, along the way to reaching that vision, takes on the care of Lennie Small (Michael Hendrick) who is also searching for a better way. But Lennie is what our grandparents might have called “not quite right.” A big man with a small aptitude, his aspirations are simple: friendship, a home and some small, soft things he can stroke and pet. The problem is, Lennie doesn’t know his own strength and sometimes, when he’s simply trying to be gentle, breaks and kills things, from small animals to hands and necks.

Hendrick, a last-minute replacement for the tenor originally slated to sing Lennie, has made this role his own by slipping into the skin of this lovable but dangerous galoot with such a tight fit, vocally and emotionally, it’s hard to think of him as anyone else. Hendrick, who’s sung everything from Bacchus in “Ariadne” at the Met to Parsifal with the Lyric Opera of Chicago, has a soaring tenor voice that seems endless in range, color and depth. Yet, his acting is so skilled, his characterization so complete, you forget he’s singing; with remarkable enunciation and body language, he totally personifies Lennie.

Anderson also embodies the part of George, singing the role with a sturdy, flexible, strong baritone that never strains and always personifies this kind-hearted, trustworthy man of the rails and roadhouses.

There’s only one woman in this opera, and she’s such a tart, so much the flirt, so sordidly self-centered, she doesn’t have a name. She is, simply, Curley’s Wife. Played with astounding dynamism by studio artist Chelsea Basler, her soprano cajoles, trifles, seduces and dallies with the enormous range of notes and emotions Floyd has given her, making her the villain in a dress, the demise of dreams.

Carlson (Marvin Kehler) and the Ballad Singer (Jason Winfield) — both studio artists — make strong impressions in their roles. And Slim (Matthew Hanscom) becomes the shining light of understanding and strength with characterization and vocalism to match, while Andrew Gangestad, as Candy, uses his powerful bass to personify an old man who’s not too elderly to have a dream of his own.

Michael Unger has taken this beautifully constructed opera and turned it into a brilliant piece of theater. Singers are allowed to soar but, through Unger’s intelligent and poignant direction, they use their singing voices to embody their characters. David Neely, the conductor, brings out every important nuance and sound from the excellent orchestra while permitting the singers the freedom to act with their voices and bodies.

The scenic design, adapted from a production by the renowned John Conklin, has interior sets — barns and bunkhouses — so real you can almost smell the timber. And, as always, Howard Tsvi Kaplan’s costumes and Ken Yunker’s lighting set the tone for the era with care and ingenuity.

Kudos must also be given to Pede the dog, who seems born to his role on stage. Pede gets our Golden Biscuit Award for best four-footed performer.

“Of Mice and Men” is a true American verismo opera. Lyric and often tonal, Floyd has used his music to underscore this great American tragedy with a theatrical genius reminiscent of another great composer of the theater, Puccini. It’s not an easy story but, then, neither is “Madama Butterfly” or “Turandot.” Raw emotion fairly swims through every note; it’s even evident in the silences. Floyd works with tension, and he has us riveted as we wait for the inevitable gunshot and snap of a neck. And, from the prolonged (and deserved) cheers and ovations at the end of this production, it’s made converts of many who never thought they’d salute a 20th-century opera.