Back to List
Acclaim (For Reviews by opera role, see Repertoire)
'OF MICE AND MEN' MOVES OPERA AUDIENCE
Tweet 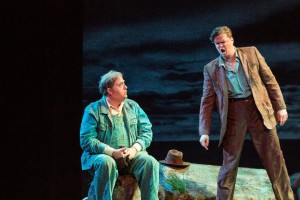 One of the marks of an effective tragedy is the way its conclusion affects you even though you have seen it coming all along.

This truism is especially applicable to contemporary American composer Carlisle Floyd's 1970 operatic setting of John Steinbeck's novel, "Of Mice and Men," an iconic version of "the American dream" and its consequences. In pursuit of this dream, the acquisition of a home of their own, in this case a small farm far away from their vagabond existence, Lennie (Michael Hendrick) and George (Sean Anderson) work as ranch hands. Their arrival at the bunkhouse of a ranch run by the irritable Curley (Jon Jurgens), after a restless journey during which Lennie's distressing urge to touch and eventually smother soft furry creatures has made them the objects of police pursuit, sets in motion the machinery of epic tragedy.

It soon becomes clear that the currents of animosity run deep in the bunkhouse, in particular because of the presence of Curley's wife (Chelsea Basler), who never hesitates to use her sexual allure as a weapon against her husband, whom she blames for the fact that she is not the Hollywood star she planned to be. Other ranch hands, including the sympathetic Slim (Matthew Hanscom) and the aging Candy (Andrew Gangestad) are drawn into this seedy situation, which results in the shooting of Candy's aging dog, an omen of what is to come.

Sean Anderson, left, as George Milton, and Michael Hendrick as Lennie Small in the Sarasota Opera production of "Of Mice and Men."

As George plans to acquire a small ranch for himself and Lennie, more incidents of Lennie's tendency to kill the thing he loves surface with the deaths of additional animals and revelation of the inappropriate touching of a woman which caused the police chase at the beginning of the opera. For all the attempts to control Lennie's impulses, it becomes clear that he will pay for his inadvertent crimes, especially the killing of Curley's wife, with his own life and at the hand of his only friend, George.

The musical structure that supports this complex of motives is often as bi-polar as Lennie, with a sumptuous orchestral texture under the edgy, strident and often atonal vocal lines. Lennie and George often sing against the orchestra, while Curley's wife is given a nearly-coloratura line that depicts her Hollywood dreams in ways totally at odds with the dramatic situation in which she finds herself, the only female in sight. The contrast of her flighty sounds with the often-sumptuous masculinity heard around her is stunning.

Despite the impression that one is often hearing two operas of differing styles, the overall effect is gradually hypnotic, especially when George is forced to kill Lennie before their dream of "living off the fat of the land" can be realized. Their final scene is tragically gripping and bestows the finality this strange work demands. On Saturday evening, that reward was greatly appreciated by a hushed audience as the impressive protagonists and the superb orchestra, under the direction of David Neely, brought the opera to its inevitable close.