Back to List
Acclaim (For Reviews by opera role, see Repertoire)
'OF MICE AND MEN' IS PURE AMERICANA
Tweet 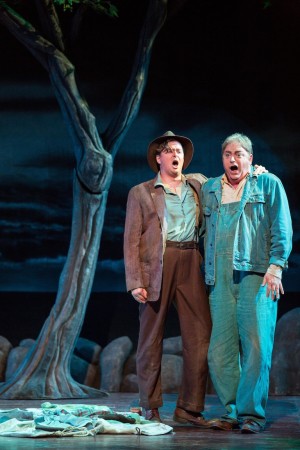 SARASOTA — It's a man's world. In Carlisle Floyd's Of Mice and Men, all the characters are men, except for one, and she doesn't have a name, but is simply called Curley's Wife.

Adapted from the John Steinbeck novel and play, Floyd's opera is true to that grim tale from the American West, full of the aching loneliness of men with no place to call home, or even much reason to live, trundling from one dead-end Depression era ranch job to the next.

Tenor Michael Hendrick and baritone Sean Anderson star as Lennie Small and George Milton, respectively, in the Sarasota Opera production that opened Saturday night, and it's hard to imagine these iconic outcasts portrayed any better. When they yearn for their own "small, shingled house on two acres of land," it expresses an essential American dream in deeply moving fashion.

The two give sensitive expression to male bonding, with Anderson finding unexpected vulnerability in the blustery George. As the hulking Lennie, Hendrick combines child-like tenderness and scary violence in superbly nuanced singing.

Soprano Chelsea Basler plays the aforementioned woman without a name, though she has a substantial role as the ranch boss' unsatisfied wife with dreams of her own of becoming a movie star, avidly leaning into the coloratura ornamentation that makes her such a vocal contrast to the rest of the manly cast.

Floyd's score — he also wrote the libretto — is a prime specimen of musical Americana in the spacious Copland style, and the orchestral interludes contain evocative suggestions of Hollywood soundtracks for classic Westerns like The Searchers or High Noon. There are some dissonant strings reminiscent of the Bernard Herrmann score for Psycho. The homespun harmonica at the end is a rare misstep.

With Of Mice and Men, conductor David Neely and director Michael Unger have put on their third American classic for Sarasota Opera, after Vanessa last year and The Crucible in 2011. They make a good tandem, as all three productions have been highlights of their seasons.

Strangely, given such success, the company's 2013-14 schedule doesn't have an American work. Instead it includes Die Fledermaus and The Little Sweep, a youth opera by Benjamin Britten, in the fall; and then two Verdi works — Il Trovatore and Jerusalem — The Barber of Seville and a foray into Wagner with The Flying Dutchman in the winter.

Floyd, 86, looking natty in a double-breasted blazer, took a bow after Saturday's performance of Of Mice and Men. Trivia note: Anton Coppola, longtime music director of Opera Tampa, now retired, conducted the 1970 premiere of the opera in Seattle.

Singers from the Master Chorale of Tampa Bay board a chartered bus this morning bound for Miami, where they are singing in three performances of Beethoven's monumental Ninth Symphony with the Cleveland Orchestra. It's a feather in the cap of artistic director James K. Bass and the chorus, who were invited (and are being paid) to perform by the legendary orchestra as part of its winter residency at the Adrienne Arsht Center. About 120 singers from the Master Chorale join about 80 from the Master Chorale of South Florida for the Beethoven opus in concerts Thursday, Friday and Saturday, conducted by Giancarlo Guerrero. The Master Chorale also is singing a pre-performance program of a cappella works by Mendelssohn, Rheinberger, Rachmaninoff and Eric Whitacre Friday and Saturday. Information: arshtcenter.org.

Of Mice and Men