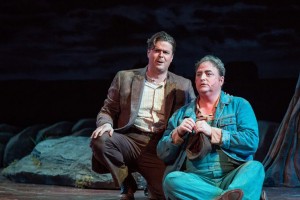 In Carlisle Floyd's Of Mice and Men, it's a man's world. All the characters are men, except for one, and she doesn't have a name but is simply called Curley's Wife. Adapted from the John Steinbeck novel and play, Floyd's 1970 opera is true to that solemn saga from the American West about men with no place to call home, shuttling from one dead-end Depression- era ranch job to the next.

Tenor Michael Hendrick and baritone Sean Anderson starred as Lennie Small and George Milton, respectively, in the Sarasota Opera production (seen Mar. 9), and it's hard to imagine these two outcasts portrayed any better. Male bonding, American loner style, was expressed in touching fashion when the pair dreamed of someday having their own "small, shingled house on two acres of land." Anderson found surprising vulnerability in the blustery George and brought huge passion to his working man's aria about how there must be more to living than "An unused razor blade left behind / A worn-out truss an' a faded necktie / An old harmonica an' a burnt- out pipe." As the hulking, childlike Lennie, Hendrick gave a performance that contained both scary violence and tenderness, as in his superbly nuanced Act III soliloquy in which, having just killed Curley's Wife, he waited in the dark woods for his protector once again to save him: "Hurry up, George, an' find me/ I'm so cold."

Soprano Chelsea Basler played the woman without a name — a sexual tease with dreams of becoming a movie star — and provided the coloratura ornamentation that made her such a vocal contrast to the rest of the manly cast. In smaller parts, Matthew Hanscom shone as the sympathetic Slim, who sounds the lugubrious theme that "ranch hands die alone." Andrew Gangestad's stump-armed Candy delivered a powerful condemnation over the corpse of Curley's Wife. Jon Jurgens was suitably despicable as the wife-abusing Curley.

Though it lacks the melodiousness of Floyd's most successful opera, Susannah, his scoring of the Steinbeck tale — the composer also writes his own librettos — is a prime specimen of musical Americana in the spacious Copland mode. The orchestral interludes were especially interesting, containing evocative suggestions of Hollywood soundtracks for classic Westerns, such as The Searchers. There were dissonant strings reminiscent of Bernard Herrmann's music for Psycho. The homespun harmonica at the end seemed a rare misstep. Floyd, now eighty-six, looking dapper in a double-breasted blazer, took a bow after the opening-night performance.

With Of Mice and Men, conductor David Neely and director Michael Unger staged their third work in Sarasota's American Classic Series, following Samuel Barber's Vanessa (2012) and The Crucible, by Robert Ward (2011). The productions have been highlights for the company, garnering critical praise, prestigious awards and grants from the National Endowment for the Arts. But the local opera audience is conservative, and these twentieth- century works didn't do well enough at the box office to sustain the series. It is going on hiatus, with no American operas planned for the 2013–14 season.