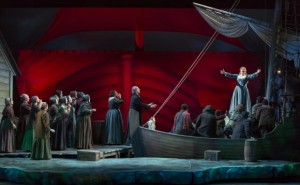 Wagner’s “Der Fliegende Hollander,” (“The Flying Dutchman), is a larger-than-life, sweeping opera that symbolizes a mythic, "Brigadoon"-like tale and romantic notion that only the love of a faithful woman can save a seafarer from a life worse than many deaths. It’s the saga of a hunky sea captain who’s doomed to sail the seas on a ghost ship that reveals itself only once every seven years, for one day, so the Dutchman at the helm may search for the love of a woman who will remain true to him for eternity. We meet him as his ship materializes on a rocky Norwegian coast — an apparition in red that glows with a spectral, supernatural aura. It’s the first act of “Dutchman,” and Wagner creates a 40-minute bass duet that spews glorious music at us like sea foam flying from crashing waves.

Act one of “The Flying Dutchman” is more of a scene-setter than action-thriller. The Norwegian sailor, Daland, sung with a strong, robust voice by bass Harold Wilson, has boundless dreams of bounty that will make him rich beyond measure. And, when he meets a stranger (the Dutchman, himself, played with stentorian grandeur and pathos by bass Kevin Short) from the mysterious, looming, blood-red ship, hears his story and sees the abundant riches he’s gathered from his centuries at sea, he decides to give him his daughter in marriage, to fulfill the Dutchman’s dream of a beautiful, faithful wife.

In an hour or so, in the second act, we meet Senta (embodied fully by the incredible soprano Dara Hobbs), the long-suffering, dreamy young girl who’s at home, yearning for the Dutchman whose portrait looms over their home like an phantom waiting to pounce to life. She’s surrounded by her women friends who spin spinning wheels to please their men with gifts when they finally return from their seafaring adventures. She’s pledged to Erik, a hunter (sung by the dramatic tenor, Michael Robert Hendrick), but has eyes only for the mythic Dutchman.

The story, like the spinning wheels, weaves a spell that captures the listener and carries us into a land we know cannot exist but wraps us so cleverly in its spectral cloak, we’re carried into the cold, dark seas and woven into its very fabric.

What takes us there is the singing. This is a cast of such compelling, powerful singers, it’s impossible not to be drawn into their persuasive story.

Top among them is Michael Robert Hendrick, the tenor who played such a convincing Lennie last season in Sarasota Opera’s production of “Of Mice and Men.” There, it was his powerful acting and vocal prowess that made us believers. As Erik in this Wagnerian epic, his formidable dramatic tenor takes over, making him a confused, passionate, despairing lover, deserving but spurned.

Dara Hobbs, who began with Sarasota Opera some 11 years ago as an Apprentice Artist, has since gone to Europe, where she’s immersed herself in the large Wagnerian and Straussian roles, such as Isolde and Ariadne, in major houses from Leipzig, Germany, to Bayreuth, Germany. Sounding like a young Birgit Nilsson, she has a ringing, dramatic soprano voice of polished steel that’s positively thrilling. The more she sings (and Senta sings a lot), the more power she has, cutting over the excellent orchestra like a laser, never pushing and always leaving us with the impression that there’s more. Hobbs is also a superbly believable actress and, when she throws herself, backward, into the waiting waves to save the soul of her Dutchman, she does it with the same passion and controlled abandon she uses in her singing.

Harold Wilson as Daland, Senta’s father, is making his Sarasota Opera debut with a ringing bass voice that, with care, could take him into the dramatic heft needed for Wagner. Kevin Short, the stalwart bass who’s been showing his ample voice in varied roles from his debut here in 1991 as Mephistopheles in “Faust,” to his charmingly comic appearance a couple of seasons ago in “Un giorno di regno,” did some of his finest singing yet as the Dutchman. A former wrestler, Short’s stage presence is masterful. He appears and commands our attention. When he opens his mouth, his large, cutting basso dominates the stage. As they say in commercials, Short is the Dutchman.

None of this could happen without the musical leadership of Conductor David Neely and the impressive Sarasota Opera Orchestra. There may be a lot of music being made on the stage, but Wagner has made sure the instrumental action in the pit is just as formidable and important. From the well-known overture to the final sweeping music lines at the end of this epic, Neely and the orchestra become another important character in the show.

Tom Diamond, the director who brought it all together on stage, was not only making his Sarasota Opera debut, he was also directing his first Wagner opera, and he did it with the light touch needed for such a substantial piece of musical theater. This is an opera that can seem static, especially in the first act. But Diamond seems to have worked with his excellent cast to make each performer a believable, three-dimensional individual, making for an electrifying performance.

David P. Gordon’s brilliant scenic design, especially the phantom ship hovering over the stage, punches home the gripping force of the story. And Ken Yunker’s lighting is pure stage-craft, taking us from storm-whipped seas into a Vermeer-like interior of a seafarer’s home and, finally, that transfixing moment when the ghosts of the ship come alive. All together, they make this a thrilling, chilling, captivating opera. - See more at: http://www.yourobserver.com/news/diversions/A-and-E/0302201432630/MUSIC-REVIEW-Sarasota-Operas-The-Flying-Dutchman#sthash.KpfiZcxb.dpuf