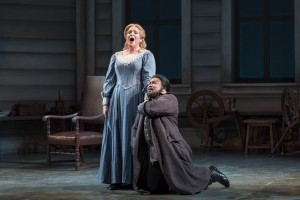 There's a problem with the music of Richard Wagner. People seem to either love it or hate it, and sometimes not because of the music, but for the beliefs of the man. I encourage anyone with doubts to set them aside and see the Sarasota Opera's production of "The Flying Dutchman" (Der Fliegende Holländer.)

While the cast list features four leads, the main character is truly the music itself. This exceptional opera orchestra, under the direction of conductor David Nealy, delivered Wagner's expansive and demanding score with nary a wobble. The horns and brass proved themselves particularly powerful in ways they are seldom called upon in Italian grand opera.

Wagner's "Dutchman" uses a simple story line, one of the key ways it differentiates itself from its Italian and French contemporaries. According to legend, the Dutchman is condemned to sail the seas for eternity, returning to land only once every seven years. If, when on land, he is able to find the undying love of a faithful woman, he will be set free.

With so little conflict and action, stage director Tom Diamond, in his Sarasota Opera debut, turns to lively and highly effective interactions among the cast on stage, including sailors managing the rigging of a storm-tossed ship. The handsomely evocative set designs, such as a ship with mast and sail, were created by David P. Gordon for the 2000 debut of this production.

In Act I a ship captain, Daland, and his crew have found safe harbor for a stormy night. The men's chorus delivered a testosterone-filled strength of collective voice. The women's chorus makes an equally strong impression in Act II, spinning and chatting while waiting for the sailors to arrive. Across the board, the chorus was as strong as the leads.

We meet bass Harold Wilson's Daland, as well as bass-baritone Kevin Short as the Dutchman, in the first Act as they set the background before Daland agrees to offer his daughter to the wealthy, yet ghostly Dutchman. The two men have strongly, deeply grounded voices, but Short had only a tenuous grasp of the true power and pitch security that would have made his Dutchman otherworldly.

The tuneful goods are left in the able hands of studio artist Jon Jurgens. He's Daland's steersman who introduces the sailors' drinking song that ends this act with bubbling optimism. We hear that tune throughout, as well as various other leitmotifs, a hallmark of Wagner's new vision for opera.

Daland's lovely daughter Senta is already enthralled by a portrait of the Dutchman even before her father arrives with her soon-to-be betrothed. Singing with her girlfriends and then declaring her love, Dara Hobbs as Senta made it clear that she has the voice of a true Wagnerian soprano.

This opera is not yet on the scale of Wagner's "Ring," but this music still requires more amplitude and strength from singers than almost any other composer's operas. Hobbs was simply glorious in the long-arching lines of her lovingly faithful leitmotif. She easily expressed her commitment and nearly overpowered both of her love interests.

Michael Robert Hendrick as Erik, the hunter and Senta's former lover, delivered many moments of a true ringing heldentenor. Spurned and indignant he kept an admirable focus in tone and character.

True to Wagner's intention, the final moment with Senta throwing herself into the crashing waves in sacrifice to the Dutchman and the rising above in a halo of light to pledge themselves for eternity was transcendent. All the elements of lighting, thanks to Ken Yunker, set, characters and music made for some of the best theater yet in this opera season.