Back to List
News
Telegram.hr Interview: American tenor who became famous after debuting at the Met, performs opera in Zagreb; we talked with him
Tweet 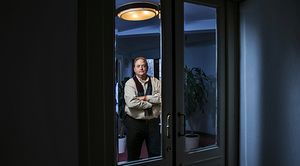 When I first saw Michael Robert Hendrick, so tall, corpulent, light-tanned, a bit sweaty, my first impression was that he does not look like a world opera star, but rather a regular guy who runs a local butcher shop. However, indeed it was the important American tenor, who debuted, no less, at the Metropolitan Opera as Menelaus in Strauss' Die Ägyptische Helena, under the baton of Fabio Luisi.

Since then, he has been in high demand by all the big opera houses. During his 23-year, long and impressive career, I will list only a few titles and roles that have marked it: Samson, Parsifal, Lohengrin, Don Jose, Erik… At the Kennedy Center in Washington DC in 2001, he was named Artist of the Year for the role of Lennie Small in the opera Of Mice and Men by Carlisle Floyd. (The role of Lennie, in the film adaptation of the Steinbeck novel, was portrayed by John Malkovich).
In the midst of preparing the comic opera Love for Three Oranges

He loves the Slavic repertoire, sings in Russian and Czech, and among his noted roles are Laca in Jenufa, Živnij in Osud (Destiny), Vodemón in Iolanta, Levko in May Night, Šujski in Boris Godunov… He is congenial and open, one could chat with him for hours about various subjects. He does not belong into a group of narrow-minded professionals, who would not share any details other than ones about music scores, careers and ego.

The trigger for our conversation is the Zagreb premiere of the comic opera Love for Three Oranges by Prokofiev, scheduled for February 17th, which is being presented by the Croatian National Theater and its tireless stage director Krešimir Dolenčić, with sets and costumes by Simon Bejer, and choreography and scenic movement by Larisa Navojec and Mario Vrbanec.

Among the big operatic ensemble, in two casts, are singers Luciano Batinić and Berislav Puškarić as King Tref, and Dubravka Šeparović Mušović and Sofia Ameli Gojić as Princess Clarice. Hendrick is double cast as the Prince with Nikša Radovanović.

TELEGRAM: What was the defining moment that made you accept the engagement for the role of the Prince in the opera Love for Three Oranges by Prokofiev? As far as I know, you had not worked previously with the director Krešimir Dolenčić, but you have sung alongside the diva Dubravka Šeparović Mušović.

Hendrick: My wonderful colleague and friend Dubravka Šeparović Mušović had told me how wonderful Zagreb is and how I must spend time here. We had a great collaboration and became friends after we were both engaged in Salome in Wuppertal several years ago, as Herodes and Herodias. I loved performing in Der fliegende Holländer (The Flying Dutchman) with Maestro Bareza in Mexico City and Guanajuato, Mexico at the Festival Internacional Cervantino, and we collaborated beautifully. Later I found out that Zagreb was preparing Verdi's Les Vepres Siciliennes, directed by Janusz Kica, but the tenor role was already cast. There was an interest in my participating in the performance of Schoenberg’s Gurre-Lieder under the baton of Nikša Bareza, and I came over for that last fall. I was in Zagreb for a month and fell in love at first sight.

TELEGRAM: What was so fascinating about Zagreb?

Hendrick: Many of my colleagues were surprised when I told them how much I loved Zagreb. In Zagreb you can walk through the center and everything seems close by. I had the most wonderful experience with Gurre-Lieder in beautiful Lisinski Hall with Maestro Bareza, great singer colleagues, and singing with two orchestras and three choirs on stage. I consider myself very fortunate that the director Dubravka Vrgoč and Maestro Bareza invited me to Zagreb again. I owe my thanks to them!

TELEGRAM: Have you ever thought about settling down one day in a smaller European city, perhaps Zagreb, Vienna, or Budapest?

Hendrick: Since I first returned from Zagreb, I asked my wife, “What do you think, could we live in Zagreb?” However, we have a sixteen year-old son, in high school, who is about to make big choices about his future path, what and where to study, etc.. Therefore, for now, it is impossible to think about moving. He is currently the top academic student in his class and will be able to apply for scholarships to good universities, perhaps even in Europe. However, I believe it is a great privilege to live in Zagreb, so close to Vienna and Munich, which are important cities for my career. Recently I had the opportunity to possibly jump into a production in Vienna. Here in Zagreb, I am enchanted by the combination of warm people, interesting places, good energy, and EU membership.

TELEGRAM: It is usual for foreigners to lose their minds over the local gastronomical offerings. Since you must be a gourmand (foodie), I presume, what has thrilled you among the selections of meat, fish, vegetables...?

Hendrick: Two items: ćevapčići and štrukli. Since I am now on a break until this evening’s rehearsal, and I still have not had lunch today, after this interview I am considering walking over and getting a portion of Zagorje Strudel. It is divine!

TELEGRAM: Here in Croatia we do not know much about your career, which has been long and steady. You are still in big demand. Congratulations on your endurance!
Hendrick: Thank you! I survived. I have overcome many challenges. As you probably know, each singer's body physiognomy changes with time. I have been lucky to sing a rather wide range of repertoire. After Zagreb, for example, Tannhäuser awaits at the Teatro Amazonas in Manaus, Brasil. Some young singers are taught that Wagner's music should just be sung loudly. But with experience and maturity, I came to the conclusion that Wagner should be sung with my natural voice. I debuted this repertoire with Richard Strauss, and I still sing his music. His music definitely helped channel my career.

TELEGRAM: Were you ambitious enough, or could you have had an even bigger success?
Hendrick: In the early stage of my career, I only had one agent, located in the U.S. But on some exclusively-American holiday, like Thanksgiving, artist agencies’ offices outside the U.S. are still open! I realized the value of having several agents working parallel in various countries.

TELEGRAM: Have you sung any roles prematurely, while you were not ready for them, either vocally, or dramatically?
Hendrick: No. That was not my case. Most things came to me naturally, at just the right time. That question is of great interest to me. Namely, for German repertoire, such as Strauss and Wagner, one must prepare adequately. I did not rush in my career. Today, I encounter singers who sing inappropriate repertoire, pieces not yet suited for them, and that is not good.

TELEGRAM: What kind of relationship do you have now with Krešimir Dolenčić? Do you get along better with conductors, or stage directors?

Hendrick: It is wonderful watching Krešimir Dolenčić at work, since I did not know him previously. I am fascinated by his work. It is complicated that such a many-layered score has all those factors one must consider simultaneously, with lots of people on stage. But, he thinks daily of something new, fresh and creative, while finding solutions for any current problem. He manages to pull it all together on the spot. It is not only directing, but an almost playful approach. I have worked with directors who are obsessive in every little detail, but Krešimir does not use his directorial position to patronize. He maintains relationships with everyone.

TELEGRAM: Stage directors are the rulers of the current operatic world, with their often-strange visions and directorial concepts. Are you a supporter of classical productions? Or do you like when the director is imaginative, when they go far and place Wagner in a space ship?

Hendrick: Very interesting question. Singers have to be bridges between traditional and modern concoctions by directors. I have worked with many kinds. Some hold on to the tradition in everything, to the smallest details, to do exactly as each stage direction says, in the score. There are many directors who insist on their visions, and don't really care about the opinions of others. I have had good experiences with both traditional and modern approaches to opera. If one is able to sustain the meaning of the work, without eroding the quality, then the modern approach, like the Salome I performed with Dubravka in Wuppertal, Germany, is interesting. There, our performances had a big success. They were thrilled with the innovations on one hand, while maintaining the quality on the other.

TELEGRAM: Are you frustrated by the fact that your career depends on such a sensitive and fragile thing, which is the voice?

Hendrick: You learn very quickly that the most essential ingredient in this profession is your voice. I try very hard not to get sick! I alway carry liquid hand sanitizer in my pocket, and use every so often. My son learned, even at three years old, to extend his hands when presented with hand sanitizer! If I weren't a singer, I would go to all the museums, bars and clubs in Zagreb, but that is something I just cannot do. I rarely use trams or subways. I prefer rather to walk around town, and stay close to the theater. I have to stay healthy, especially now in the middle of winter, during the cold and flu season. The biggest daily mission is to think about the audience. To them, I must give everything I can.

TELEGRAM: How many times during your career has the audience greeted you with 'bravos', but you were not satisfied, since you knew you could have done more?

Hendrick; That happened a couple of times in my career, when I somehow convinced myself that I wasn’t too sick to sing. I remember a performance of Ariadne auf Naxos in Munich. I sang with bronchitis, trying to convince myself everything was okay. I should not have done that, as it did not sound good. And I never received another call for that role in Munich. Although hard to do, I try for every performance to be at the highest level.

TELEGRAM: The audience has a glamorous view of an opera star’s life, however, your life follows the path of taxi, hotel, airport, new city.

Hendrick: That is the reality, you are right. You know, years ago, when I returned home to be with my family, I would go out to get the mail in my pajamas and slippers, and the neighbors, who had not seen me for weeks, had thought we getting divorced! Or then, when they would see me at home but never leaving the house, as unemployed! Now they all understand.

TELEGRAM: You are an American, currently in Europe. What are your thoughts about the new president, who inspires controversy every day?

Hendrick: I am an artist. I don't like to speak in public about politics. I will just say: We have many serious challenges in the world. May God help us!