Back to List
News
Včernji list Interview: AMERICAN TENOR MICHAEL ROBERT HENDRICK: It is an honor to be singing in the Croatian language in a magical production staged by Dolenčić
Tweet 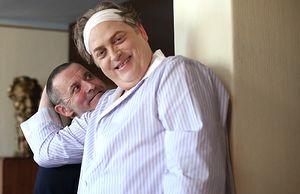 "Love for Three Oranges“ is a spectacle as far as the music is concerned, thanks to, as usual, thorough work with the orchestra by maestro Nikša Bareza, but also with the engagement of a small army of accompanists and assistants. Dolenčić showed a great love for Prokofiev's music, diving deeply and into detail, in this fairytale score.

The performance is especially rich and attractive in its visual components. For that, the most responsible person is young Australian costume and set designer Simon Bejer, a real artist of his craft. He offered a handful of intelligent and funny ideas, referring to popular art such as scenographic allusions to his homeland and the apocalyptic world of his countryman Mad Max, for example, by burying the remains of a McDonalds sign in the Australian sand, or turning the three oranges into Marilyn Monroes.

A great number of singers in many demanding roles sang on the stage. Let us mention Berislav Puškarić as the King of Clubs, Davor Radić as Leandro, Ladislav Vrgoč as Trouffaldino, Ljubomir Puškarić as Pantalone, Ozren Bilušić as the magician Tchelio, Ivanka Boljkovac as the witch Fata Morgana, Sofija Ameli Gojić as Princess Clarice and the dramatic eyes and face of Vitomir Marof which we saw in "live stream" on a gigantic screen as the demon Farfarello.

All of these and other singers of the large ensemble were a solid support to the only international guest who absolutely justified his engagement by dominating, either with his singing or his dramatic confidence, with a special compliment to his clear diction of Croatian text. He is the American tenor Michael Robert Hendrick in the role of the Prince, a hypochondriac entranced to fall in love with three oranges.

A short conversation with the singer, who shined in Zagreb for the first time last year, as a soloist in a magnificent performance of Schoenberg's cantata "Gurrelieder" under the guidance of maestro Bareza in Lisinski Hall, covered and published in the paper issue of Večernji list on the night of the premiere, still counts as a trustworthy invitation and recommendation for all performances of the opera "Love for Three Oranges".

Mr. Hendrick, did you ever have any contact with Croatia before your first visit last year, and before your work with maestro Bareza in Mexico where you sang the role of Erik in Wagner's "The Flying Dutchman"?

I have known Croatians while living in New York City, and in 2015, I sang with Dubravka Šeparović Mušović in Germany. We were a perfect stage couple, singing the crazy roles of Herodes and Herodias, in "Salome" by Richard Strauss and we received excellent reviews. Dubravka had spoken a lot about her amazing country and her home theatre, so it became a great wish for me to visit and see the Croatian National Theatre and Croatia.

The word is that you've already fallen in love with Croatia so much last year that you instantly wished to come and live here...

I liked Zagreb immediately and I spoke to my wife about the possibility. But it will have to wait for we have a son who is still in high school and who, as one of the best students, will be able to compete for scholarships to universities. Also, there is only one year left for him to earn the rank of Eagle Scout in the Boy Scouts of America, and I know how important it is to him, from my own experience in Scouting.

When and how did you decide to become an opera singer?

My first contact with music was in primary school, playing the trumpet in LaGrange, Georgia. In my freshman year of high school, the band director allowed me to “challenge” a senior student to compete for his first chair trumpet position in the band. I won and spent my high school years playing solos in concerts and during halftime shows of my school's football games. For a solo, I had to step out from the band, and I especially remember the goose bumps from the applause of the whole stadium after the song “Georgia On My Mind” started with my solo. After high school I began college with a modest trumpet scholarship, but I couldn't see myself as a professional trumpeter so the next fall I switched to singing. With the great support of my first voice teacher Harry Musselwhite, I carried on from there.

You have a very wide repertoire. Which operas and composers do you prefer?

I have been blessed with a gift of being able to sing various styles. That is why I always avoided the tag of the Wagnerian tenor, or any other, in fact. I have always considered myself simply a tenor who can sing a lot of things.

How do you feel about being a part of this production?

This is the first time I have sung any of Prokofiev's music. I have always wanted to sing his opera “War and Peace”, and now I want to, even more! All the roles in this opera are over the top and melodramatic, and I think the public will enjoy it a lot. Everyone who comes to the performance should leave their cares behind and come to laugh and join us in this world of absurdity which Krešo Dolenčić created so professionally. I have been so impressed. All of the effort will result in a magical production. It is an honor for me to be a part of it, while singing in Croatian!